No Result
View All Result

Investing in cannabis stocks can seem riskier than it really is. While marijuana remains illegal at the federal level, it’s really only a matter of time before that changes. After all, support for the legalization of marijuana is at an all-time high, with more than 90% of Americans believing that cannabis should be legal for either medicinal or recreational use, according to a Pew Research survey last year. Whether it’s two years, four years, or more before legalization takes place, at this point, it’s more of a question of when rather than if it will happen.

That’s why I’m comfortable in saying that multiple pot stocks should be solid buys to hang on to over the next decade. After all, buying before legalization takes place and more opportunities arise could lead to better returns later on.

Innovative Industrial Properties (IIP) is at the top of this list for good reason. The cannabis-focused real estate investment trust (REIT) is a pick-and-shovel play, so its risk is minimal, and it’s in great shape to generate strong, consistent profits.

A lack of profitability in the industry plagues many companies, and that can make investing in the sector risky. But with IIP, that isn’t the case. The REIT normally nets 50% or more of its revenue as profit. And in just two years, its sales have more than quadrupled, from $44.7 million in 2019 to $204.6 million this past year. 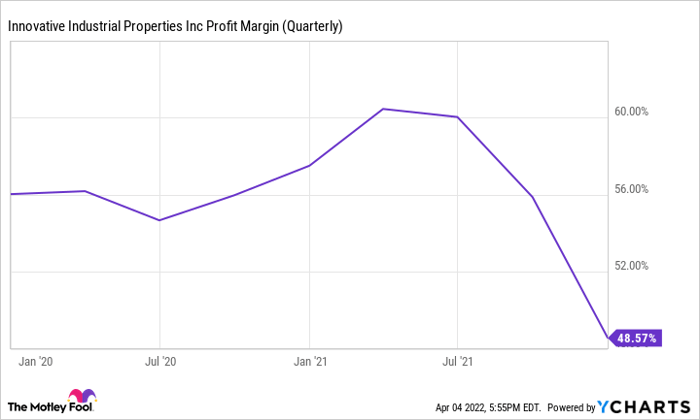 In 10 years, the company will likely be in more states and have a much larger portfolio of assets (and thus, more revenue and profit). In 2021, IIP acquired 37 cannabis-growing properties, finishing the year with 103 locations in total. This included properties in many of the largest cannabis markets in the country — California, Colorado, Florida, Massachusetts, and many others.

Although shares of IIP have been struggling of late, the company’s sound financials make it one of the safer ways to invest in the cannabis industry today.

Cannabis producer Green Thumb Industries has various brands and products in its portfolio designed to meet the needs of a range of consumers. Whether someone is looking for premium flower or something they can use socially, or are just looking for the health and wellness benefits of cannabidiol, the company’s products offer consumers an array of different experiences. The company has 76 stores across the country, and its products are distributed in 15 states.

Although it’s a cannabis producer, Green Thumb is still relatively safe. Last year, its sales totaled $893.6 million, representing a 61% increase year over year. And it earned a profit of $75.4 million on that, for a profit margin of 8.4%. It’s not as impressive as IIP’s bottom line, but any type of consistent profitability in the sector is impressive. Even in 2020, Green Thumb reported a modest profit of $15 million on sales of $556.6 million (for a profit margin of 2.7%).

Another promising aspect of Green Thumb’s business: It has been increasing its cash flow from operating activities. For investors, this is an important consideration because a company that is generating strong cash flow can potentially fund its own growth without needing to constantly issue shares, which results in dilution for existing shareholders. 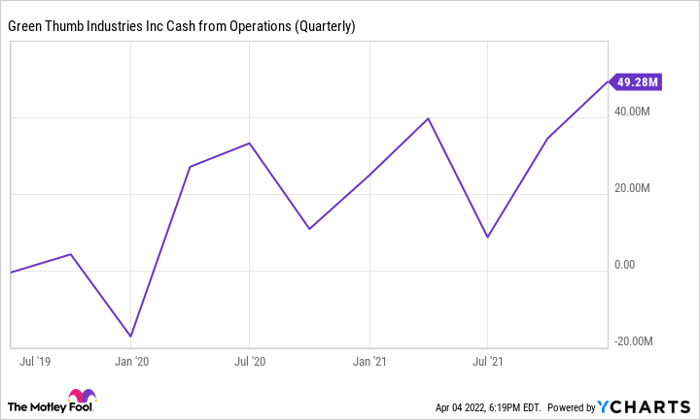 The second cannabis producer on this list is Cresco Labs. It recently announced that it was acquiring Columbia Care in a deal that will make it the largest multistate operator in terms of pro forma revenue, which will total more than $1.4 billion. The combined company will have over 130 retail stores and hold a leading market share position in multiple markets, including Colorado and Pennsylvania.

It’s a strategic move that can position the company for some excellent opportunities ahead. Although these companies aren’t profitable based on generally accepted accounting principles (GAAP), they both generate positive adjusted earnings before interest, taxes, depreciation and amortization (EBITDA). Both companies have also reported impressive growth, with Cresco’s sales rising 73% in 2021 to $822 million, while Columbia Care’s top line rose by 156% to $460.1 million.

Even without the deal, however, Cresco on its own would still be an attractive investment, as the business is sound, reporting gross margins of about 50%. And it’s also coming off a fourth quarter in which it posted record cash flow from its operating activities of $38 million.

Although it may not be profitable just yet, I’m confident that Cresco will continue to be one of the top pot stocks in the country a decade from now, given its financial discipline and sound investing decisions, such as pursuing the acquisition of another strong multistate operator in Columbia Care.

Here’s The Marijuana Stock You’ve Been Waiting For
A little-known Canadian company just unlocked what some experts think could be the key to profiting off the coming marijuana boom.

And make no mistake – it is coming.

Cannabis legalization is sweeping over North America – 18 states plus Washington, D.C., have all legalized recreational marijuana over the last few years, and full legalization came to Canada in October 2018.

And one under-the-radar Canadian company is poised to explode from this coming marijuana revolution.

Because a game-changing deal just went down between the Ontario government and this powerhouse company…and you need to hear this story today if you have even considered investing in pot stocks.

Simply click here to get the full story now.

How Long Do CBD Gummies Stay In Your System?

Are These Cannabis Stocks Heating Up or Just Blowing Smoke?

7 Reasons Your Plants are Growing Slowly

Weeding out the facts about medical marijuana

ADVERTISEMENT
No Result
View All Result